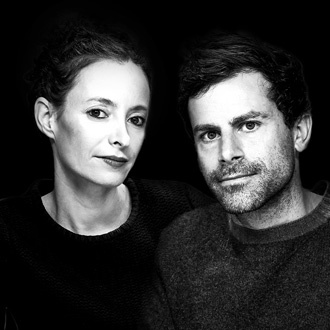 Raw-Edges, Studio Profile
Yael Mer and Shay Alkalay founded the design studio Raw-Edges after graduating from the Royal College of Art in 2007.Colours, pattern making and movement are some of the primary factors behind their design approach, as is curiosity—as their official description puts it, "The studio became...a place where they could embark on a continuous journey of discovery, turning the world upside down and inside out, cracking things open and studying their structure , always striving for surprise, wonder, humour." Through their work, they seek out new discoveries, manipulating the things around them to find new and fascinating things.Raw Edges’ witty and inventive approach has led to great collaborations with international companies including : Vitra, Louis Vuitton, Stella McCartney, Airbnb, Established & Sons, Moroso, Cappellini, Kvadrat, Mutina, Golran and Caesarstone.Following their work, the studio awarded Designers of the Future by Design Miami/ Basel, Elle Deco interna-tional Edida Award, Wallpaper Design Award, iF Design Award, and other prestigious awards for their work. They have also been nominated several times for the Designs of the Year Award at the London Design Museum, and just recently awarded 2020 Designers of the Year by the AW Magazin in Germany. Their designs were acquired for the permanent collections at international museums, including the MoMA in New-York